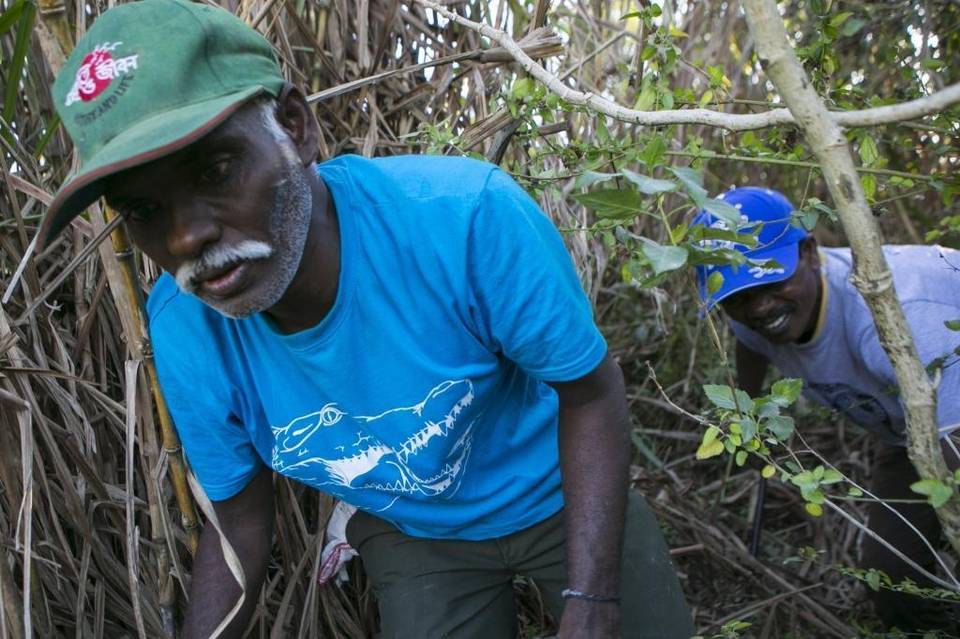 What Judas snakes, snake-sniffing dogs and even hunters from around the globe have struggled to accomplish may finally be pulled off by a pair of singing snake catchers from India: solving the riddle for finding Burmese pythons in Florida’s Everglades.

In just two weeks this month, the two tribesmen from Southern India, working with the University of Florida, caught 14 pythons. That included a monster 16-foot female holed up in the ruins of the old Nike missile base on Key Largo.

Irula trackers and biologists discovered this 16-foot female python, along with three other snakes, holed up in a 27-foot long, 18-inch wide shaft at the old Nike missile base in Key Largo last week.Courtesy of Joe Wasilewski

For perspective, consider last year’s second Python Challenge, an annual contest to draw attention to Florida’s python problem. The hunt attracted 1,000 hunters, most of them amateurs. Over a month, they managed to bag just 106 snakes. The year before, hunters snagged 68.

“If we fall anywhere in that range, I’m going to be really happy,” said UF biologist Frank Mazzotti, who heads a team of researchers investigating pythons and other wildlife.

The pilot project, being funded by the Florida Fish and Wildlife Conservation Commission, is also relatively cheap: just $68,888 for two tribesmen and two translators for two months.

Since arriving in early January, Masi Sadaiyan and Vadivel Gopal, both in their 50s and members of the Irula tribe, India’s famed snake hunters, have headed into the Everglades almost daily. Armed only with tire irons to punch through dense burma reed and sharp limestone rock and trailed by biologists, the pair are on the lookout for the sparkle of snakeskin in the bush. They’re also searching for what the snakes left behind: a ripple in the sand, a tunnel through grass or scat.

In the nearly two decades since pythons became established in South Florida, finding them has proved one of the thorniest problems for controlling their spread. The cryptically patterned snakes easily disappear into marshes that are nearly impossible to search. Biologists have tried sending out radio-tagged “Judas” snakes to ferret out other snakes, trained dogs and even tried poisoning prey. But the number of voracious snakes, blamed for nearly wiping out the population of small mammals in Everglades National Park, keeps growing. This year for the first time, hatchlings were found in Key Largo. In November, one turned up in Biscayne Bay on a water monitoring station.

The idea of having Irula snake trackers train to target python has been percolating for years among Mazzotti; award-winning herpetologist Romulus Whitaker, a leading conservationistin India and alum of the old Miami Serpentarium; and another Serpentarium alum, South Florida herpetologist Joe Wasilewski. In 1978, Whitaker founded a snake-hunting co-op for the tribe after unregulated snake trading was banned. The tribe now hunts cobras to collect antivenin to battle the nation’s snake-bite problem: about 50,000 die annually and up to 1.5 million are bit.

But almost nobody thought it was possible.

“People said, ‘They know how to hunt in India, not the Everglades, and cobras, not pythons,’” Mazzotti said.

Whitaker was certain the Irula, whose ancestors hunted pythons to the point of extinction in their state, would succeed.

“I pointed out that part of the year, the swamp is quite dry and that’s the time when they would be able to find the things like back home, the tracks of snake,” he said. “This is very big and probably the biggest invasive reptile problem that has ever existed on the planet, so let’s do something.

Even to South Florida experts, Irula tracking techniques seem mysterious. They move slowly and rather than focus on roads and levees where snakes have typically been found basking, they head straight for thick brush. The Irulas believe the boulders and high grasses that line the levees are more lucrative hunting grounds. That seems to be proving true: UF biologist Ed Metzger has so far determined that seven of the 13 snakes captured would not have been found without the trackers.

And when the going gets slow, everyone must stop to squat for a quick song of prayer — usually an ancient invocation mixed with an ad lib about pythons or the weather — accompanied by a beedi cigarette.

To the surprise of local biologists, the trackers have also been able to detect information critical to snake management: the python’s sex, approximate size and even how long ago it was in the area.

“Our search image is really just the snake, but they’re talking about something else,” said Metzger.

Sadaiyan and Gopal are staying with Wasilewski, who is helping scout out locations while picking up tracking tips.

While the team says it’s too early to tell how successful the partnership will be, this month’s haul at the missile base is a good sign. Wasilewski, who worked as an MP at the base and has been hunting snakes for three decades, suggested the spot, thinking the piles of rubble left behind would probably be good snake hideouts. Since the hatchlings were first detected on Key Largo last year, biologists also think there still may be a chance at containing their spread.

“No one is saying this is a python eradication tool. But on a local scale, I think it can be,” Metzger said.

The Irulas first spotted a tail near the 18-inch opening of a 27-foot long shaft covered by ficus roots. Once they hacked their way through the roots, they spied the fat belly of what they suspected was a large snake and hurried to the other end of the vent — formerly used to run electric cables to the missiles — to block its escape. Instead they found another, smaller tail. For the next five or so hours, the crew wrestled to extract what turned out to be four snakes: the 16-foot female, a 10-footer and two eight foot-long snakes.

Metzger is carefully logging all the catches, which are generally euthanized or used for education, keeping track of how much ground is covered each day, who spots the snakes and conditions.

“We’re going to be calculating python per dollar and python per hour,” he said.

Those numbers will then be compared to other efforts, including the Judas snake project — which cost about $11,000 per snake caught — and a group of volunteer trackers costing about $177 per snake, Metzger said. So far, the Irula effort works out to about $4,920 per snake — but they have more than another month left and it’s hard to put a value on new skills South Florida experts are learning.

“Since the Irula have been so successful in their homeland at removing pythons, we are hoping they can teach people in Florida some of these skills,” Kristen Sommers, chief of FWC’s Wildlife Impact Management Section, said in a statement.

As for the Irulas, they seem to be enjoying only their second trip out of India. Wasilewski has taken them to Arbetters for hotdogs and to his daughter-in-law’s school to talk to her AP environmental science class. On Sunday, they watched the NFL playoffs. But the big draw is clearly the snakes, the largest they have ever captured.