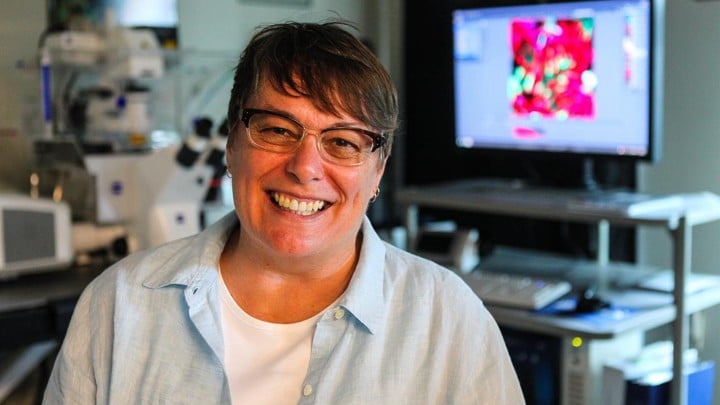 The Fight for Corals Loses Its Great Champion

Ruth Gates was a champion of corals and a longtime partner of the Herbert W. Hoover Foundation.  Her contributions to marine science will be felt for decades to come and the Foundation is proud to have supported her research.  We, along with the scientific community and her friends and family, mourn her loss.

Original article can be found at: www.theatlantic.com/science/archive/2018/10/optimist-who-believed-saving-corals/574240/

Ruth Gates, who died Thursday, October 25, 2018 at age 56, was known as much for her laugh as for her science. She laughed easily, loudly, and infectiously. When she first snorkeled around Heron Island, in Australia’s Great Barrier Reef, she reportedly laughed so loudly that boat drivers could hear her from the surface. “Laughing even underwater—that’s Ruth,” says Tracy Ainsworth, a close friend and coral scientist at The University of New South Wales at Sydney. “She was so thrilled by the reef that she couldn’t contain her joy.”

Coral scientists have little to laugh about these days. Between rising temperatures, acidifying water, pollution, diseases, storms, and other threats, reefs around the world are dying, transforming from bountiful worlds of color and life into deathly realms of spectral white. Half the world’s reefs have died in the past few decades. Even the mighty Great Barrier Reef is a shadow of its former glory. Every year, the drumbeat of doom-filled news seems to pound more loudly. For the many scientists who have devoted their lives to studying these ecosystems and are now forced to watch their slow demise, it can be hard to stay afloat.But Ruth Gates was never given to doom. As one of the world’s foremost coral scientists, she was under no illusions about the perils that corals face—but she was relentlessly optimistic nonetheless. She firmly believed that reefs could be saved and was looking for ways to do so, perhaps by breeding hardier varieties of corals that could better weather the climatic upheavals of the future.
In part, Gates’s optimism was an explicit strategy meant to spur others into action. But it was also a profound part of her identity. Even colleagues who describe themselves as glass-half-full people told me that they would ask “What would Ruth do?” when they felt despair. Others spoke about her irrepressible enthusiasm and riotous sense of humor.

Gates passed away five months after she was first diagnosed with brain cancer. She is survived by her wife, Robin Burton-Gates; her brother, Tim Gates; her extended family; and a vast community of colleagues and friends. “We constantly laughed, even through her treatments,” says Burton-Gates.

To lose anyone is tragic, but to lose someone like Gates—an optimist’s optimist, a cornerstone of hope—is especially so. Her friends collectively describe her as someone who truly contained multitudes. Empath and fighter, iconoclast and team player, introvert and spokesperson—she was all these things, as well as an outspoken advocate for corals and the people who study them. “She was radiance that we were privileged to gather around, our hands toward the fire,” said Ouida Meier, one of her lab managers, in an email to her team.

Gates, who was born in England, decided she wanted to be a marine biologist in elementary school, after watching Jacques Cousteau documentaries. “She was told she wasn’t smart enough, and that she should go into athletics instead,” Burton-Gates recalls. In typical fashion, she ignored her detractors and did both. She eventually became the director of the Hawai‘i Institute of Marine Biology and the founder of a nearby karate school, the Coconut Island Dojo. A third-degree black belt, she would do knuckle and fingertip push-ups to the sound of breaking waves. And “when she hit the practice bag, it sounded like a gun going off,” says Burton-Gates.

This path to scientist and sensei was a long one. She moved to Jamaica in 1985 as a naive graduate student who just happened to find herself studying Caribbean corals at a time when they were starting to die. The corals would expunge the colored microscopic algae that live in their tissues and provide them with nutrients, becoming wan and weak in the process. Gates showedthat these bleaching events were more common in warmer waters—a crucial connection that decades of later work would confirm. “It was a terribly important discovery,” says Peter Edmunds of California State University at Northridge, a coral scientist and close friend of 34 years.