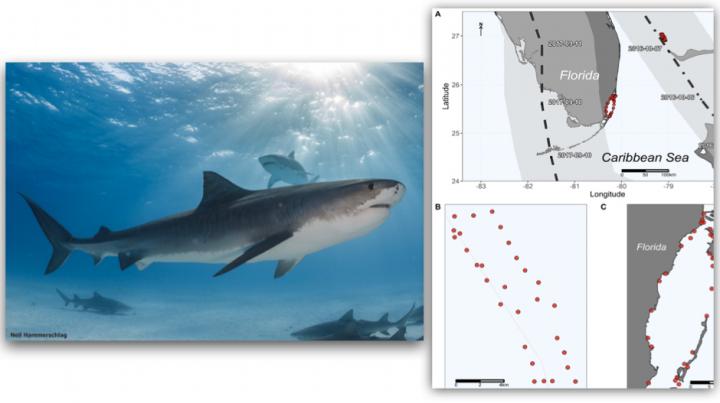 MIAMI–A new study led by scientists at the University of Miami (UM) Rosenstiel School of Marine and Atmospheric Science tracked large sharks in Miami and The Bahamas to understand how these migratory animals respond to major storms, like hurricanes.

The researchers analyzed acoustic tag data from tiger sharks (Galeocerdo cuvier), bull sharks (Carcharhinus leucas), nurse sharks (Ginglymostoma cirratum), and great hammerheads (Sphyrna mokarran) before, during, and after Hurricane Matthew in 2016 and Hurricane Irma in 2017. They found that they behaved differently by species and location.

For example, in response to Hurricane Irma passing by Miami, bull sharks, great hammerhead, and most nurse sharks appeared to mostly evacuate the shallow waters of Biscayne Bay, similar to previous studies that found that small sharks evacuate inshore shallow waters in the wake of a storm. However, large tiger sharks in the Bahamas remained in shallow inshore waters, even as the site received a direct hit from the eye of the category-5 Hurricane Matthew, and immediately following the storm, the number of tiger sharks doubled.

“I was amazed to see that big tiger sharks didn’t evacuate even as the eye of the hurricane was bearing down on them, it was as if they didn’t even flinch.” said Neil Hammerschlag, a research associate professor at the UM Rosenstiel School and the Abess Center for Ecosystem Science and Policy. “their numbers even increased after the storm passed. We suspect tiger sharks were probably taking advantage of all the new scavenging opportunities from dead animals that were churned up in the storm.”

“Major storms, like hurricanes, are predicted to increase in frequency and strength with climate change,” said Hammerschlag, who is also the director of the University’s Shark and Research Conservation Program. “How these storms impact the environment, including large sharks, is of interest and conservation concern to many.”

The study, titled “Large sharks exhibit varying behavioral responses to major hurricanes,” was published online May 1 in the journal Estuarine, Coastal and Shelf Science. The study’s authors include: Neil Hammerschlag, Mitchell Rider and Robbie Roemer from the UM Rosenstiel School, Lee Gutowsky from Trent University, Austin Gallagher from Beneath the Waves, Michael Heithaus from Florida International University and Steven Cooke from Carleton University.

The study was funded through grants from the Ocean Tracking Network, the Save Our Seas Foundation, the Disney Conservation Fund, and the Herbert W. Hoover Foundation. The NOAA Cooperative Biscayne Bay HFA project supported maintenance of the acoustic receiver array in Biscayne Bay and logistical boat support was provided by the International Seakeepers Society.