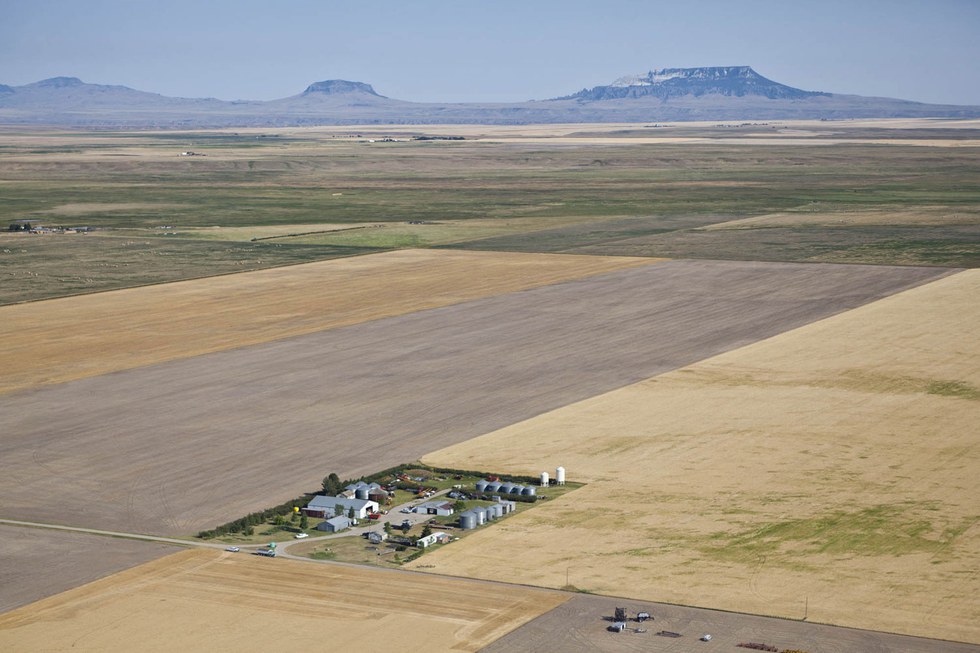 Soils reveal a hidden cost of farming, and fertilizers

In one Montana ag basin, drinking wells test at twice the federal health standard for nitrate pollution. That’s a problem on many levels. Montana State researchers are working with farmers to solve it.

For every ton of fertilizer farmers apply to fields in the United States, almost 1,200 pounds is wasted due to inefficiency, with almost 400 pounds of that waste flushing into streams and aquifers.

That’s a lot of nitrogen – farmers apply 22 million tons of fertilizer a year in the United States alone, according to the U.S. Department of Agriculture. Nitrogen runoff is responsible for a lot of polluted drinking water sources and compromised aquatic ecosystems across the globe — a problem only getting worse in regions with growing population and development.

New research out of Montana State University finds that, in one agricultural basin in the upper Missouri River watershed, groundwater and streams mirrored soil chemistry. For the environment, you are what’s in your dirt. Now scientists are working with farmers who manage the land to make the findings relevant to those with power to make a difference.

In the Judith River basin, where farmers fertilize crops of wheat and barley – and then pray for timely rain, researchers found mean nitrate levels in drinking wells more than twice federal standards. Those concentrations exceeded the 75th percentile for Montana’s statewide agricultural well network and landed in the 95th percentile for a 2011 survey nitrate pollution in U.S. wells.

Loss of nitrogen from soil triggers problems on many levels, says Montana State University Water Quality Associate Specialist and graduate student Adam Sigler, the lead author of the study, published this fall in the Journal of Hydrology. Infants are particularly vulnerable to nitrate pollution, which can lead to a condition known as “blue baby” syndrome.

Farmers suffer, too, as nutrients they’re paying for – fertilizer is a $58 billion industry in the U.S., according to the Fertilizer Institute – get flushed into the environment rather than boosting yield and protein in crops.

And excess nitrogen triggers a host of problems in the environment, from algae blooms in water to impaired plant growth on land and the increase of greenhouse gases in the atmosphere.

The Montana researchers found some silver linings. Planting a cover crop – rather than leaving the land fallow – helps. “Simply growing a crop every year mitigates the environmental implications,” Sigler said. And getting farmers engaged can trigger change.

That dialog, researchers concluded, “allowed agricultural producers to evaluate their role in landscape-scale water quality issues and to help identify management strategies that would be practical and effective.”

And read about what some California farm towns are doing to fight nitrate pollution, in this report published in September in Resilience.

Where Are the Sharks? Scientists Use DNA Sampling to Find Out

Scientists are estimating the relative abundance and diversity of shark species across vast stretches of the ocean with little more than a few plastic bottles filled with seawater.

By analyzing environmental DNA (or eDNA), a relatively inexpensive and non-invasive technique, researchers can determine if a species is—or has recently been—in the area. The work, led by Professor Stefano Mariani and researcher Judith Bakker from the University of Salford, UK, is detailed in a study published Dec. 4 in Scientific Reports.

Perhaps unsurprisingly, the study found that areas experiencing less human impact and greater shark protections appear to support more shark species. These more pristine areas also may support greater abundances of several shark species, although the study addressed only the abundance of the species relative to one another.

Scientists used a method called eDNA metabarcoding to isolate DNA directly from seawater samples (the technique is also used on land, for example in analyzing soil). Unlike traditional animal monitoring approaches, eDNA does not require researchers to see the organisms of interest, or catch and tag them.

In recent years, eDNA has been used to detect rare or invasive species, particularly in rivers and lakes, where water is relatively contained compared to the ocean. The new study shows that this technique can also be used to monitor large, elusive species, even including highly mobile ones like sharks. Assessing geographical patterns of diversity and, potentially, abundance in shark populations can help inform conservation strategies, such as the creation and monitoring of marine protected areas.

Developing management strategies for sharks is a challenge due to the high cost and effort associated with large-scale monitoring of shark species. In this study, scientists estimated shark diversity and relative abundance in the Caribbean Sea and the Coral Sea. From February to November 2015, researchers collected water samples from four Caribbean locations—Jamaica, the Bahamas, Belize, and Turks & Caicos Islands; and three locations in the Coral Sea—Noumea, New Caledonia North, and the Chesterfield atolls. These areas represented various levels of human impacts and known shark protections.

The researchers genetically identified 22 shark species—12 in the Caribbean and 16 in the Coral Sea (nine species appeared in both regions).

They also found a greater diversity and relative abundance of sharks in the Coral Sea than the Caribbean. Within the Caribbean, the study found the most shark species (11) in the Bahamas, where shark fishing is banned, and fewer in areas with greater human impacts, including Jamaica (two species) and Belize (one species). Similarly, in the Coral Sea shark diversity was greater in remote locations such as New Caledonia North (14 species) and Chesterfield atolls (11 species), while waters near the densely populated city of Noumea supported only five species.

While eDNA research is still new, scientists are already making rapid improvements with it, including the ability to distinguish closely related species from one another. Still, the technique has limitations: In some cases, eDNA can specify only the genus for closely related species. And scientists still need to compare this new method to established approaches used to estimate the relative abundance of individual species. Also, much more research is required to determine whether estimates of actual population abundance can be obtained using the technique.

“This technique has the potential to become a powerful conservation tool in the near future,” says Mariani. “Conservation and management of highly mobile species like sharks requires rapid and extensive monitoring across large ocean areas and at numerous times a year. A streamlined water-collection program may be the only approach able to provide this level of coverage.” 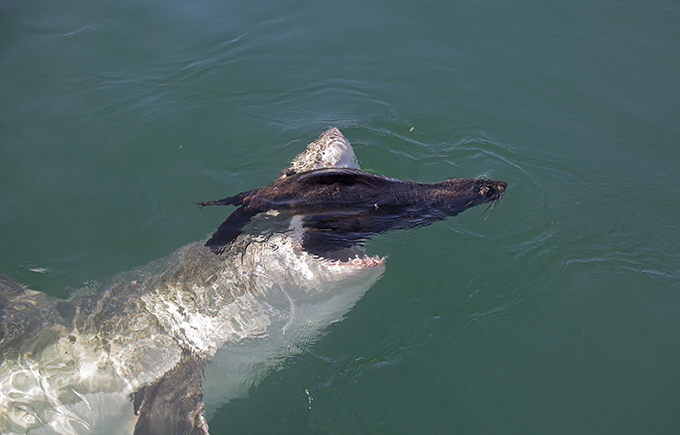 MIAMI—While a little added stress may be helpful to flee a dangerous situation, or to meet an approaching deadline, it’s no secret that prolonged exposure to the stress hormone cortisol is linked to health problems. So, what effects does stress have on animals in the wild that need to navigate the same waters as the ocean’s top predator— great white sharks?

Predators are known to impact the population abundances of their prey by killing and consuming them. But can predators in the wild also exert control over their prey from the stress associated with living in high-risk waters?

University of Miami (UM) Rosenstiel School of Marine and Atmospheric Science-led research team found just the right situation—fur seals living among one of the densest populations of great white shark off South Africa’s Western Cape—to test this predation-stress hypothesis in the wild.

In the three-year study, the scientists focused their investigation on six islands in the region where Cape fur seals (Arctocephalus pusillus) colonies have varied seasonal exposure to hunting great white sharks (Carcharodon carcharias). To evaluate the seals’ stress levels in relationship to hunting sharks, the team collected hundreds of seal fecal samples and measured them for glucocorticoid metabolite concentrations (fGCM), a cortisol stress hormone.

The team compared stress hormone levels in seal fecal samples with residency patterns of great white sharks at the different seal colonies based on satellite tagging data. The team also compared seal fecal cortisol concentrations with measured shark attack rates on seals at one the sites. The researchers found that seals exhibited high stress levels when the risk of great white shark attack was high, at locations where and when the seals were under risk of unpredictable and lethal attack from great whites as the seals they left the safety of an island’s inner perimeter and passed through a gauntlet of white sharks hunting to reach offshore feeding grounds.

“Our findings showed that seals exhibited high stress in the places and at the times when great whites were hunting and the seals had no way of anticipating or effectively preventing a predation attempt from any shark that decided to attack,” said the study’s lead author Neil Hammerschlag, a research assistant professor at the UM Rosenstiel School and UM Abess Center for Ecosystem Science and Policy.

“Comparable stress responses were not detected in places and times where sharks were not hunting. Interestingly, stress responses were also not detected at one island where seals could reduce their risk of attack by using kelp beds and reef as underwater refuges, despite the presence of hunting great whites,” said study co-author Scott Creel, a Professor at Montana State University.

In one location, called Seal Island in False Bay, the seals’ fecal stress levels were highly correlated with weekly shark attack rates. However, seals did not show comparable signs of stress at another location known as Geyser Rock in Gansbaii, which contains kelp beds and reefs that the seals use as natural safe passageways from sharks as the move about the island.

Based on the findings, the authors suggest that predation risk will produce physiological costs in the form of a stress response when risk cannot be adequately predicted or controlled by behavioral responses.

“These results underline the ecological importance of apex predators,” said Hammerschlag. “Any resulting loss in health or survival of prey due to predator-induced stress could have cascading effects on the entire ecosystem and food web.”

The study, titled “Physiological stress responses to natural variation in predation risk: evidence from white sharks and seals,” was published on December 1 in the journal Ecology, DOI: 10.1002/ecy.2049

The study’s authors include: Michael Meÿer, Simon Mduduzi Seakamela and Steve Kirkman from the Republic of South Africa’s Department of Environmental Affairs, Chris Fallows of Apex Shark Expeditions, and Scott Creel from Montana State University. Funding for the study for provided in part by Canon USA and the Herbert W. Hoover Foundation.