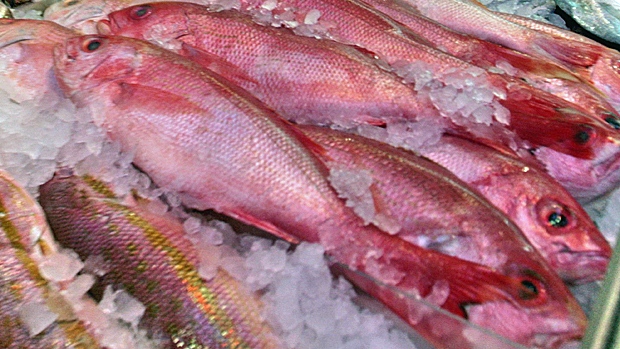 Tiny pieces of plastic are making their way into fish and shellfish found at the supermarket, a new study has shown.

The findings are part of a report prepared for the International Maritime Organization, the UN agency responsible for preventing marine pollution.

It’s not yet been established what effect these tiny particles of plastic will have on the humans who consume them, the report says.

Researchers do know, however, that microplastics get into aquatic habitats from many different sources, says Chelsea Rochman, an assistant professor of ecology and evolutionary biology at the University of Toronto and co-editor of the report.

These range from tiny fibres that come off the synthetic fabrics of our clothing, to bits of car tire that wear off on roads and make their way through storm drains into waterways, she says.

They also vary in size such that they can be consumed by marine animals both big and microscopic.

“It has infiltrated every level of the food chain in marine environments and likely fresh water, and so now we’re seeing it come back to us on our dinner plates,” says Rochman.

Gutting fish won’t rid them of the bits of plastic they consume.

“These materials enter marine organisms, not just their guts but also their tissues,” says Peter Wells, a senior research fellow with the International Ocean Institute at Dalhousie University. 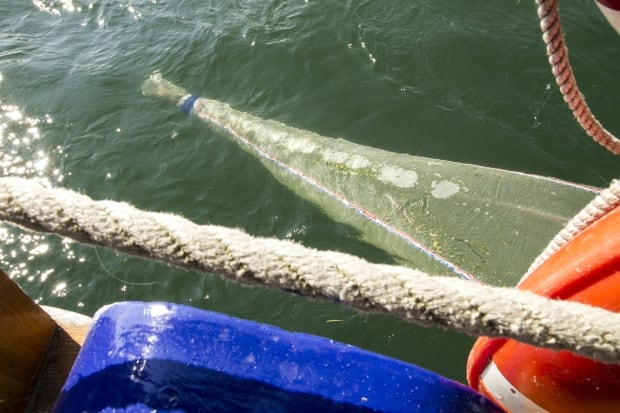 A net designed to gather samples of microplastic particles is dragged through Lake Ontario on July 15, 2015. (Micki Cowan/CBC)

And it’s not just the plastic itself, but the stuff that comes along with it, that’s a concern, says Wells.

Microplastics absorb or carry organic contaminants, such as PCBs, pesticides, flame retardants and hormone-disrupting compounds of many kinds, he says.

Wells says that until recently, the world’s attention was on larger pieces of plastic in the ocean — the kind of garbage obviously visible to the naked eye.

Pictures of seabirds with plastic rings from six-packs of beer around their necks were shared with alarm, for example.

“Only when scientists started looking at plankton and water samples more carefully did they realize that a lot of the plastic was being broken down, not seen except under a microscope,” says Wells.

​Among all the microplastics in our lakes and oceans, microbeads — those little exfoliants from facial scrubs and hand soaps — are the best known by the public.

“Microbeads are really what brought microplastics to the table in Canada as something that we would regulate and monitor,” says Rochman. A federal government ban on toiletries containing microbeads will come into effect in 2018.

However, these are not the main source of microplastics, she says. 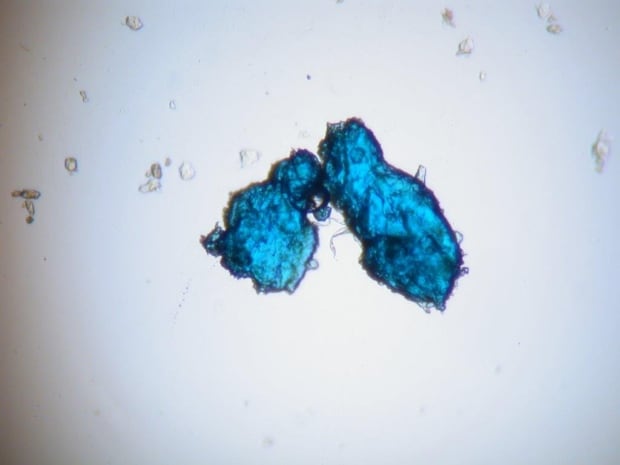 Microbeads, like these from a sample of toothpaste seen under a microscope, are the best known among microplastics but not the most common source, says Chelsea Rochman, co-editor of the report. (Dr. Harold Weger)

“The biggest source is likely larger plastic items that we can see during beach cleanups that enter the water and over time break down with the sunlight into smaller and smaller pieces of microplastic.”

What does this mean for fish as food?

Kate Comeau, a registered dietitian and the spokeswoman for Dietitians of Canada, cautions consumers not to come to conclusions too quickly as a result of these findings.

“It’s an important conversation,” says Comeau, “but we don’t want people running away from eating healthy sources of food.”

Rochman stresses that more research is required before anyone lets microplastics determine what’s for dinner.

“What we really need to do is a risk assessment … nobody has done that for microplastics.” 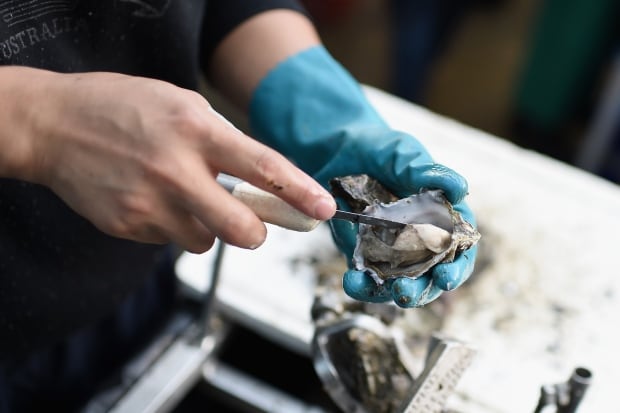 Researchers have found microplastics in molluscs like oysters both in field research and in retail outlets, says Rochman. (Cameron Spencer/Getty Images) 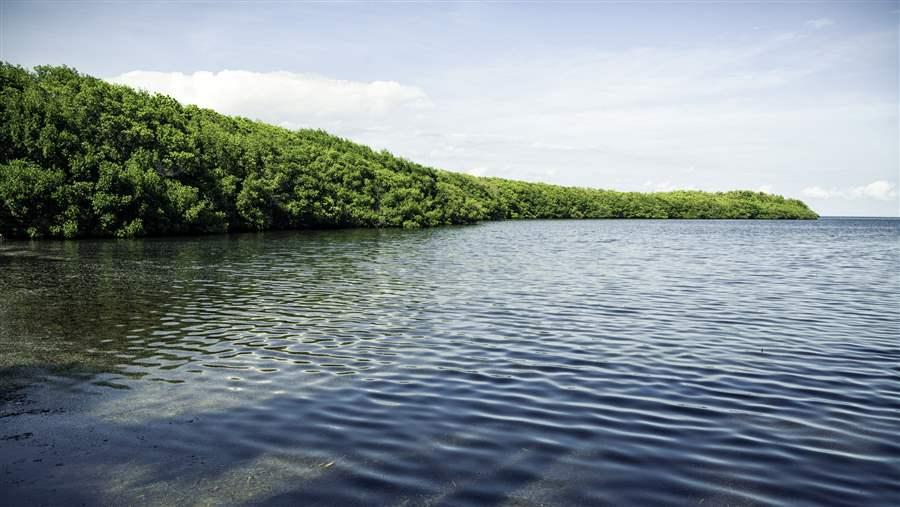 Research on quantifying—and, where possible, increasing—all of those values is advancing, and the resulting data should help policymakers and other stakeholders make more informed decisions about whether and how to protect and manage coastal ecosystems. Some of those experts joined regional officials and others at two recent workshops in South Florida that highlighted the emerging research. The participants included numerous Pew marine fellows—ocean conservation experts who have worked under fellowships from The Pew Charitable Trusts.

In the first workshop, held Nov. 14 at the University of Miami and organized by Pew with support from the Herbert W. Hoover Foundation, Pew fellow Les Kaufman of Boston University described how he expects Biscayne National Park, located in Florida’s Biscayne Bay, to provide a corridor for reef-associated marine species as they shift their ranges in the coming decades due to warming waters.

If that critical lifeline were broken because of further coral degradation, he said, it could leave associated species with no habitat to move into. He discussed options for continued conservation, such as restoring coral reefs, which involves growing corals in a “nursery”—on land or in the ocean—and transplanting them where they are most likely to take hold and thrive.

Pew fellow Mike Beck of The Nature Conservancy and the University of California, Santa Cruz presented his research showing that coral reefs prevent billions of dollars in coastal storm damage every year.

Most reef restoration projects are too small to substantially increase these and other benefits, but larger-scale restorations might do so.  Beck suggested that such projects could create new funding opportunities by attracting capital from coastal developers, insurance companies, or related sectors.

Pew fellow Andrew Baker of University of Miami’s Rosenstiel School of Marine and Atmospheric Science described how strains of heat-tolerant algae that live inside coral could be used to enhance restoration. For example, it might be possible to seed reefs with tolerant algae to prepare them for the expected warming of the ocean.

To connect these researchers’ ongoing work to decision-making about this ecosystem, regional government representatives, stakeholders, and staff of Biscayne National Park provided their perspectives on priorities and current management planning. They noted, for example, that a stronger case could be made for the economic value of coastal ecosystems. The group will continue collaborating, including by consolidating the available data on corals and coral reef habitat in Biscayne National Park, and by communicating this value to the public.

In the second workshop, held Nov. 15–17 at Nova Southeastern University in Fort Lauderdale, Pew marine fellow Bob Richmond of the University of Hawaii emphasized the need to restore reefs using genetically diverse corals that can cope with unexpected stress, especially because climate change is expected to bring novel environmental conditions.

One technique for achieving that is larval propagation, which involves creating new combinations of coral genes through sexual reproduction in a laboratory. This, researchers say, yields more diversity than does the dominant technique of growing new corals from fragments of existing ones.

The Fort Lauderdale workshop was convened by the National Oceanographic and Atmospheric Administration and focused on improving and expanding reefs throughout the Caribbean. More than 100 practitioners, scientists, and managers attended, including Pew fellows Kaufman, Beck, and Baker.

Larval propagation may also prove a faster way to regenerate a reef than individual plantings, which most restoration projects now use, although it is not clear how to reliably coax young, mobile corals to settle in large numbers to create new reefs.

Experts reiterated messages from the first workshop, namely that large, fast-growing reef restoration projects would offer flood protection for long, contiguous swaths of coastline and thus could attract funding from sources other than traditional conservation-minded supporters.

It is through projects like these that Pew staff is helping to foster research that is scientifically credible and part of realistic solutions to pressing problems.