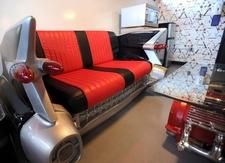 [Editors Note:  This article originally appeared in the Canton Repository on January 29, 2016]

By Jessica Holbrook
A group of students launched the Garage — officially the Walsh University Innovation Center — this week. Housed in the back of the Katherine Drexel House, the innovation center gives students the space to turn their ideas into something tangible.
The Garage, a Walsh University space designed by business students to act as an on campus business incubator and innovation lab.

Big things are happening behind the doors of an unremarkable white garage on the Walsh University campus.

A group of students launched the Garage — officially the Walsh University Innovation Center — this week. Housed in the back of the Katherine Drexel House, the innovation center gives students the space to turn their ideas into something tangible.

“We always said that ideas will die on paper. We really wanted to have a space where students can come together” and work on projects, said Matt Strobelt, a Walsh junior.

Strobelt, alongside fellow students Andrew Chwalik, Josh Ippolitio and Iagos Lucca, came up with the idea last fall. They pitched the idea to Walsh President Richard Jusseaume, who jumped on board. The project was funded by donors.

Before the Garage, there really wasn’t a space where students could get together and share creative ideas and problem solve, or even create new businesses, said Phil Kim, an assistant professor of business and the Garage’s faculty adviser.

Before it was transformed, the structure was filled with boxes, furniture and other odds and ends, said Chwalik, a senior.

Now the room, completely designed by students, exudes innovation: Three of the four walls are covered in dry-erase paint, power strips can be pulled down from the ceiling, and an electronic whiteboard and monitors allows for collaboration.

The name obviously comes from it being located in a physical garage, but also reflects a trait of business like Apple and Microsoft.

“Who doesn’t know a big name company that started in a garage?” Ippolitio said.

The Garage is more than just a gathering space; it also offers mentoring, networking and education opportunities.

They have a list of mentors, both Walsh alumni and members of the public, that can help students unsure of how to proceed with their project, Strobelt said.

They also hope to partner with local businesses on innovation challenges and host events such as Shark Tank watch parties, Ippolitio said.

The ongoing lecture series is another way to engage the community, inside and outside of the university, Chwalik said.

Though its founders are business students, the Garage is open to everyone on campus.

Entrepreneurship isn’t limited to one school or major. Students from all backgrounds are valuable to the creative process and can foster collaboration, Kim said.

“We want all those students because that’s where rich ideas get even better. There’s a depth to it. They have perspectives that (business students) wouldn’t,” he said.

The Garage plans to develop online educational tools so those who haven’t taken certain classes can learn about marketing and business topics, Strobelt said.

“As much as we want this to be about the creating a business process, it’s also … going to be a learning process, so students can learn about general business sense,” he said.

On campus, excitement has been building about the project. The founders are often stopped by students who want to pitch ideas or ask questions.

“As we progressed into this project, it’s amazing to see that many of students actually had ideas, tons of ideas, and they’re ready to start putting the work in,” Lucca said.

They thought that finding interested students would be a challenge, and it has been, “but there’s a lot of people out there who have wonderful ideas who are ready to use the space. We’re very happy to see that,” he added.

The Garage has already seen its first business venture.

“I’ve used the Garage already and it’s been a blessing so far,” he said. “I’ve had the resources and the space to make this dream a reality.”