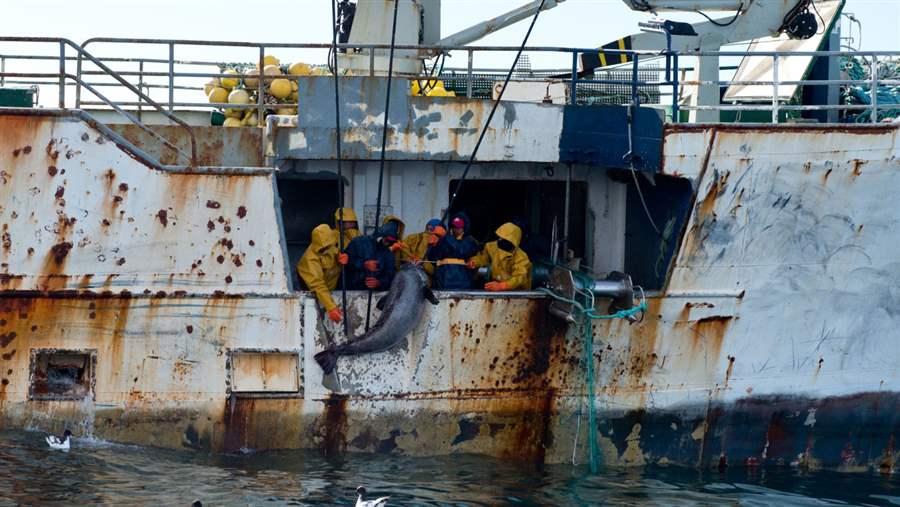 Our ocean is under assault from a battery of threats that are damaging ecosystems, depleting fish stocks, and changing the marine environment. One of those threats gets relatively little attention but is both serious and solvable: large-scale illegal fishing.

Here are seven facts about this crime, including what is being done to address it.

1. Illegal fishing accounts for up to $23.5 billion worth of seafood every year.

That’s up to 1 in 5 fish taken from the ocean. At the top end of that estimate, that’s 26 million tons of fish annually—or 1,800 pounds of fish stolen every second.

2. Up to 32 percent of seafood imported into the U.S. is caught illegally.

While illegal fishers tend to target the waters of countries with few enforcement resources, which means the bad actors face less risk of being caught, they are less discriminating about where they sell their ill-gotten catch.

A 2014 study published in the journal Marine Policy found that up to 32 percent of seafood imported into the U.S. is caught illegally. This is because once fish get past a port, it is very difficult to determine where, how, and by whom they were caught.

3. Illegal fishing is linked to a host of other crimes.

The activities connected to illegal fishing include arms and wildlife smuggling, drug trafficking, and human rights abuses. In some cases, crew members on illegal vessels have been sold into slavery and work for years at sea in horrific conditions for little or no pay.

4. Some governments make it easy to fish illegally.

Some states provide flags of registration to nefarious vessel owners and conceal the whereabouts of these vessels and their activities. Tightening policies—though regional fisheries management organizations, international treaties, and stronger control of seafood imports at the national level—can help increase accountability for such countries. For example, the European Union, with its red-yellow-green card system, has forced numerous countries to ensure that the seafood they import to the EU as caught legally.

Although defined boundaries on a map might convey a sense that all marine life within those lines is safe from human threats, protected-area designations are almost meaningless unless they are backed up by effective surveillance and enforcement. In fact, illegal fishers intentionally target reserves because they know that fish are more abundant within those areas.

This is due to a combination of factors, including patchwork fisheries policies around the world, lax enforcement at many ports, and the difficulty of policing the open ocean.

Interpol, under Project Scale, coordinates efforts to fight illegal fishing among its 192 member countries and has caught many illicit actors. And Oversea Ocean Monitor, a satellite-based platform developed by The Pew Charitable Trusts and the U.K.-based firm Satellite Applications Catapult, is proving to be a highly effective tool for spotting suspect activity across large spans of the ocean, even the most remote places.