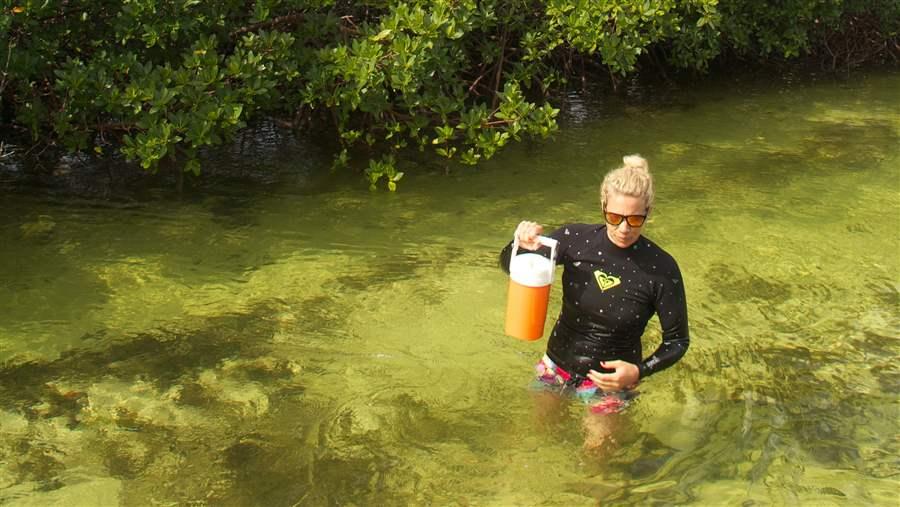 Where Are the Sharks? Scientists Use DNA Sampling to Find Out

Scientists are estimating the relative abundance and diversity of shark species across vast stretches of the ocean with little more than a few plastic bottles filled with seawater.

By analyzing environmental DNA (or eDNA), a relatively inexpensive and non-invasive technique, researchers can determine if a species is—or has recently been—in the area. The work, led by Professor Stefano Mariani and researcher Judith Bakker from the University of Salford, UK, is detailed in a study published Dec. 4 in Scientific Reports.

Perhaps unsurprisingly, the study found that areas experiencing less human impact and greater shark protections appear to support more shark species. These more pristine areas also may support greater abundances of several shark species, although the study addressed only the abundance of the species relative to one another.

Scientists used a method called eDNA metabarcoding to isolate DNA directly from seawater samples (the technique is also used on land, for example in analyzing soil). Unlike traditional animal monitoring approaches, eDNA does not require researchers to see the organisms of interest, or catch and tag them.

In recent years, eDNA has been used to detect rare or invasive species, particularly in rivers and lakes, where water is relatively contained compared to the ocean. The new study shows that this technique can also be used to monitor large, elusive species, even including highly mobile ones like sharks. Assessing geographical patterns of diversity and, potentially, abundance in shark populations can help inform conservation strategies, such as the creation and monitoring of marine protected areas.

Developing management strategies for sharks is a challenge due to the high cost and effort associated with large-scale monitoring of shark species. In this study, scientists estimated shark diversity and relative abundance in the Caribbean Sea and the Coral Sea. From February to November 2015, researchers collected water samples from four Caribbean locations—Jamaica, the Bahamas, Belize, and Turks & Caicos Islands; and three locations in the Coral Sea—Noumea, New Caledonia North, and the Chesterfield atolls. These areas represented various levels of human impacts and known shark protections.

The researchers genetically identified 22 shark species—12 in the Caribbean and 16 in the Coral Sea (nine species appeared in both regions).

They also found a greater diversity and relative abundance of sharks in the Coral Sea than the Caribbean. Within the Caribbean, the study found the most shark species (11) in the Bahamas, where shark fishing is banned, and fewer in areas with greater human impacts, including Jamaica (two species) and Belize (one species). Similarly, in the Coral Sea shark diversity was greater in remote locations such as New Caledonia North (14 species) and Chesterfield atolls (11 species), while waters near the densely populated city of Noumea supported only five species.

While eDNA research is still new, scientists are already making rapid improvements with it, including the ability to distinguish closely related species from one another. Still, the technique has limitations: In some cases, eDNA can specify only the genus for closely related species. And scientists still need to compare this new method to established approaches used to estimate the relative abundance of individual species. Also, much more research is required to determine whether estimates of actual population abundance can be obtained using the technique.

“This technique has the potential to become a powerful conservation tool in the near future,” says Mariani. “Conservation and management of highly mobile species like sharks requires rapid and extensive monitoring across large ocean areas and at numerous times a year. A streamlined water-collection program may be the only approach able to provide this level of coverage.”