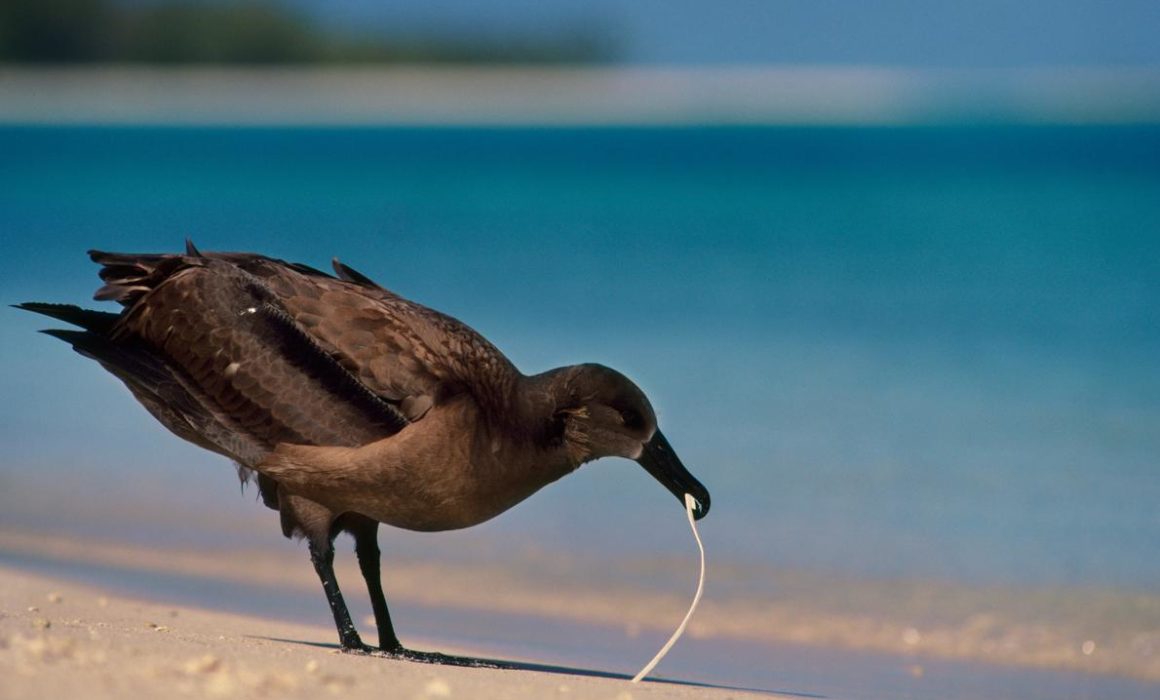 Animals Eat Ocean Plastic Because it Smells Like Food

A new study sheds light on why so many seabirds, fish, whales, and other critters are gobbling up so much marine plastic debris. And it’s not quite what scientists thought.

As the oceans fill with plastic debris, hundreds of marine species eat astonishing amounts of it. Yet the question of why so many species, from the tiniest zooplankton to whales, mistake so much of it for food has never been fully explored.

Now a new study explains why: It smells like food.

Algae are consumed by krill, a small crustacean that is the primary food source for many sea birds. As algae breaks down naturally in the ocean, they emit a stinky sulfur odor known as dimethyl sulfide (DMS). Sea birds in the hunt for krill have learned that the sulfur odor will lead them to their feeding grounds.

It turns out that floating plastic debris provides the perfect platform on which algae thrives. As the algae breaks down, emitting the DMS odor, sea birds, following their noses in search of krill, are led into an “olfactory trap,” according to a new study published November 9 in Science Advances. Instead of feeding on krill, they feed on plastic.

“DMS is the dinner bell,” says Matthew Savoca, a doctoral student at the University of California, Davis, and lead author of the study. “When people hear the dinner bell, we know food is going to be in the area. This is the same sort of idea. Once the birds’ noses have told them this is where they should expect to find krill, it gets their foraging mode turned on, and their threshold is down for what the food is. ”

Plastic debris has been accumulating rapidly in the world’s ocean, roughly doubling every decade. In 2014, a global analysis measured ocean plastic at a quarter of a billion metric tons, much of it suspended in small rice-sized particles. More than 200 animal species have been documented consuming plastic, including turtles, whales, seal, birds, and fish. Seabirds are especially at risk; a study published last year by scientists in Australia concluded that virtually all seabirds have consumed plastic.

Scientists have long known that ocean plastic is consumed because it looks like food. Sea turtles, for example, often mistake flimsy, clear plastic bags for jellyfish. Other marine animals, including fish, gobble bits of rice-sized micro plastics broken down by sunlight and wave action because they resemble the small particles they normally eat. (See the first of its kind map of ocean plastic pollution.)

But the study of how odors might play a role in marine animals’ consumption of plastic is the first of its kind. Sovaca teamed up with a scientist who studies how odors affect decision-making and a food and wine chemist to determine what smell could be the culprit.

“This does not disprove that plastic might look enticing,” he says. “Often, it’s the smell that gets animals foraging in the area and turns their feeding mode on. It adds another layer on top of it. It is far more likely that a seabird will eat it if it looked and smelled like food.”

Chelsea Rochman, an evolutionary biologist at the University of Toronto, who studies the toxic effects of plastic consumed by fish, called the study an important step toward understanding why marine animals are eating plastic.

“Throughout the literature on plastic debris, you see researchers write statements implying that animals are ‘choosing’ to eat plastic debris without a proper test or explanation of why,” she says. “This is the first group to really dive into the details of why.”

Savoca’s team decided to focus on birds already severely affected by plastic consumption: albatrosses, petrels, and shearwaters. They began the study by placing buoys of micro plastics in bags in Monterey Bay and Bodega Bay off the California coast. After three weeks, they retrieved the buoys and tested them in the lab for smell.

“They reeked of sulfur,” Savoca says.

It didn’t take long to identify DMS as a strong predictor of plastic consumption and the “keystone infochemical” that drew marine animals to plastic as if it was krill. Odor extraction tests confirmed that three common varieties of plastic acquired a “DMS signature” in less than a month. The team also found, not surprisingly, that the birds most attracted to the DMS odor are the albatrosses, petrels, and shearwaters that are most severely affected by plastic consumption.

Many of those birds nest in underground burrows, and juvenile birds spend many more months on the ground than birds that nest above the surface. Consequently, burrow-nesting birds rely much more heavily on their sense of smell to get around.

“We should be paying more attention to those species,” Savoca says.