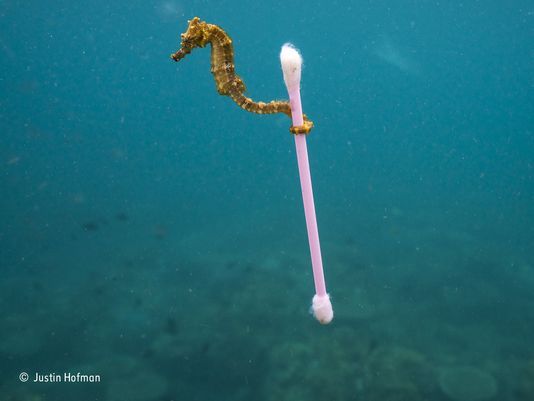 Justin Hofman’s photo of a tiny seahorse clinging to a pink plastic cotton swab highlights how plastic pollution has left virtually no corner of our world untouched.

“I wish we didn’t have to see this beautiful wildlife mixed in with all of our waste,” he told USA TODAY. “I travel all over the world, and I can’t think of a single place where people haven’t impacted the environment.”

More than 8 million tons of plastic end up in the ocean each year, and some estimates show that by 2050 there will be more plastic than fish. Hofman, who is nominated forLondon’s Natural History Museum’s Wildlife Photographer of the Year, snapped the photo while snorkeling near Subawa Island, Indonesia last year.

He said his friend pointed out the sea horse, which was holding onto a piece of seaweed and drifting with the current.

“When the tide came in, the debris came in with it, and the seahorse hopped from the seaweed to a little piece of plastic and then a Q-tip,” he said.

Hofman said his “blood was boiling,” but he continued to snap pictures.

“I took the photo in Indonesia, but this is happening everywhere in the world,” he said.

He said that many people in Indonesia are horrified by the pollution, but do not have the resources to recycle. He points out that it’s hard to tell where the plastic came from because of the oceans currents.

The competition’s winners will be announced on October 17.

“At night when I am laying in bed, I don’t feel very optimistic, but I have to be, or otherwise there would be no reason to keep doing what I do,” he said.