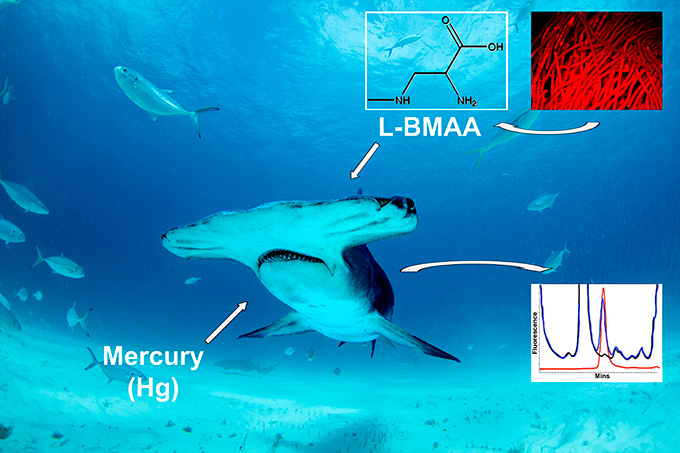 MIAMI—In a new study, University of Miami (UM) scientists found high concentrations of toxins linked to neurodegenerative diseases in the fins and muscles of 10 species of sharks. The research team suggests that restricting consumption of sharks can have positive health benefits for consumers and for shark conservation, since several of the sharks analyzed in the study are threatened with extinction due to overfishing.

Fins and muscle tissue samples were collected from 10 shark species found in the Atlantic and Pacific Oceans for concentrations of two toxins—mercury and β-N-methylamino-L-alanine (BMAA).  “Recent studies have linked BMAA to neurodegenerative diseases such as Alzheimer’s disease and amyotrophic lateral sclerosis (ALS),” said Deborah Mash, Professor of Neurology and senior author of the study.

Researchers at the UM Rosenstiel School of Marine and Atmospheric Science and UM Miller School of Medicine detected concentrations of mercury and BMAA in the fins and muscles of all shark species at levels that may pose a threat to human health. While both mercury and BMAA by themselves pose a health risk, together they may also have synergistic toxic impacts.

“Since sharks are predators, living higher up in the food web, their tissues tend to accumulate and concentrate toxins, which may not only pose a threat to shark health, but also put human consumers of shark parts at a health risk,” said the study’s lead author Neil Hammerschlag, a research assistant professor at the UM Rosenstiel School and UM Abess Center for Ecosystem Science and Policy.

Shark products including shark fins, cartilage and meat are widely consumed in Asia and globally in Asian communities, as a delicacy and as a source of traditional Chinese medicine. In addition, dietary supplements containing shark cartilage are consumed globally.

Recently scientists have found BMAA in shark fins and shark cartilage supplements. The neurotoxic methyl mercury has been known to bioaccumulate in sharks over their long lifespans.

About 16 percent of the world’s shark species are threatened with extinction. The shark species sampled in this study range in threat status from least concern (bonnethead shark) to endangered (great hammerhead) by the International Union for Conservation of Nature (IUCN).

“Our results suggest that humans who consume shark parts may be at a risk for developing neurological diseases.” said Mash.

“People should be aware and consider restricting consumption of shark parts.  Limiting the consumption of shark parts will have positive health benefits for consumers and positive conservation outcomes for sharks, many of which are threatened with extinction due in part to the growing high demand for shark fin soup and, to a lesser extent, for shark meat and cartilage products.” said Hammerschlag.

The study, titled “Cyanobacterial Neurotoxin BMAA and Mercury in Sharks,” was published in Aug. 16 in the journal Toxins. The study’s coauthors include: Neil Hammerschlag; David A. Davis, Kiyo Mondo, Matthew S. Seely, and Deborah C. Mash from the UM Miller School of Medicine’s Department of Neurology; Susan J. Murch and William Broc Glover from the University of British Columbia; and Timothy Divoll and David C. Evers from the Biodiversity Research Institute in Maine. The Herbert W. Hoover Foundation provided the funding for this study.

About the University of Miami’s Rosenstiel School

The University of Miami is one of the largest private research institutions in the southeastern United States. The University’s mission is to provide quality education, attract and retain outstanding students, support the faculty and their research, and build an endowment for University initiatives. Founded in the 1940’s, the Rosenstiel School of Marine & Atmospheric Science has grown into one of the world’s premier marine and atmospheric research institutions. Offering dynamic interdisciplinary academics, the Rosenstiel School is dedicated to helping communities to better understand the planet, participating in the establishment of environmental policies, and aiding in the improvement of society and quality of life. For more information, visit:  www.rsmas.miami.edu. To learn more about UM’s Shark Research and Conservation Program, visit www.SharkTagging.com