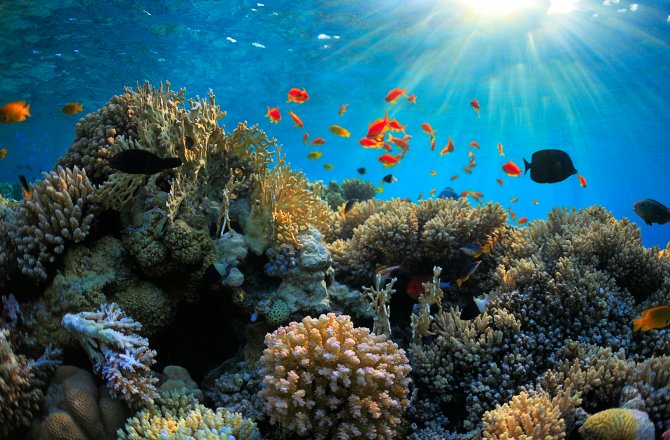 (This article originally appeared on news.discovery.com on November 30, 2015)

If you go to a tropical paradise this winter, you’ll likely snorkel on the local coral reef. If you do, take a good look, because those corals might not be around for much longer as warmer ocean temperatures kill them off.

That’s why one woman, Ruth Gates, Director of the Hawai’i Institute of Biology, is working on breeding “super corals” that can withstand the climate change that oceans are already experiencing.

Another group, in Australia, is creating “mutt” corals from different robust species to achieve the same result.

What’s unique about these approaches to coral preservation is that it’s like the land-based genetic tinkering that’s been done for millennia with livestock and crops.

Land-based agricultural breeding methods “have never been used in the oceans,” she said.

But the method Gates uses is a bit different. She calls it “induced climatization” and “assisted evolution.”

With this method, and drawing on 25 years of coral research, she and her team of young researchers have just begun a program working with the five dominant species of corals in Hawai’i, in the heavily polluted Kaneohe Bay. Water temperatures on the reefs there can swing from 86 to 91 degrees Fahrenheit in a day, a change that can tax even the hardiest of corals.

Why go to such lengths to save coral reefs? “Three things: food, coastal security and tourism,” Gates said.

Coral reefs are home to 25 percent of marine species, according to the United Nations. 275 million people depend directly on reefs for survival and 850 million live within 62 miles of one.

Reefs protect shorelines from the effects of strong storms, breaking up wave energy that could wash away coastlines and the houses on them. As storms get stronger and more frequent with climate change, the security that reefs give coastlines will become even more important.

Coral reefs generate billions of tourism dollars worldwide; in Florida alone in 2000-2001, a four-county area in southeast Florida generated around $4.4 billion in local sales around their artificial and natural reefs.

And a report released earlier this year that compared Earth’s oceans to the world’s top 10 economies ranked them as the seventh largest, with $24 trillion in assets.

A 2014 bleaching event in Kaneohe Bay spiked water temperatures beyond what many corals could tolerate. When corals are too stressed, many will eject the tiny symbiotic algae that live on them and provide corals with many of their nutrients. The corals can die, leaving behind bleached-white skeletons.

As we snorkeled on the reef, spiky balls of ghostly-white, dead corals – some three feet or more in diameter — stood in stark contrast to their healthy cousins. Healthy corals are a deep, rich, greenish brown color.

Back on the research boat, Gates reported seeing up to 50 percent dead corals on the parts of the reef section where we snorkeled.

But there was something else. “Corals can come back after almost totally dying,” Gates said.

And, not all of the corals in the bay have been affected by bleaching or the frequent influx of pollution from the heavily populated shoreline.

Gates and her team theorized that if they could take some of these “super-performing” corals and push them to the limits of the heat, acidity and pollution they could withstand, then create offspring, the babies might end up with those same robust characteristics.

“How much stress do we have to give them before they develop a genetic memory for it?” Gates said.

“The hope is that, as parents, we can program our offspring to do better,” said Raphael Ritson-Williams, a post-doctoral student on Gates’ team. This is no different, he said.

The first round of the experiment formed the doctoral thesis of Hollie Putnam, an ocean scientist on Gates’ team who now runs that part of the program. The offspring of super corals were raised in the lab until, in 2014, they were big enough to go back out to the reef.

The results of that experiment were published in the Journal of Experimental Biology, Gates said.

“The first babies were transplanted back to the reef with zero percent mortality and survived the bleaching” event of 2014, Gates said. “It was a very significant result.”

More funding — $4 million from Microsoft’s Paul Allen’s Vulcan Foundation — arrived in June for the five-year program and Gates’ team is about to transplant more super coral babies to one of the reefs in Kaneohe Bay.

Gates acknowledges that her work is controversial to some scientists, who think she’s poo-pooing the approach of trying to mitigate climate change in favor of direct intervention.

But Steve Vollmer, Associate Director of the Marine Science Center at Northeastern University, isn’t one of them. “They are good first steps to understanding the potential for adaptation in corals,” he told Discovery News.

Gates said: “We should be doing everything we can, politically and practically.”

So what’s the pot of gold at the end of the rainbow for Gates?

“In each location, to have robust (coral) species that are always ahead of climate change,” she said. “But humans will always be involved. (Warming) is happening too quickly for corals to evolve on their own.”