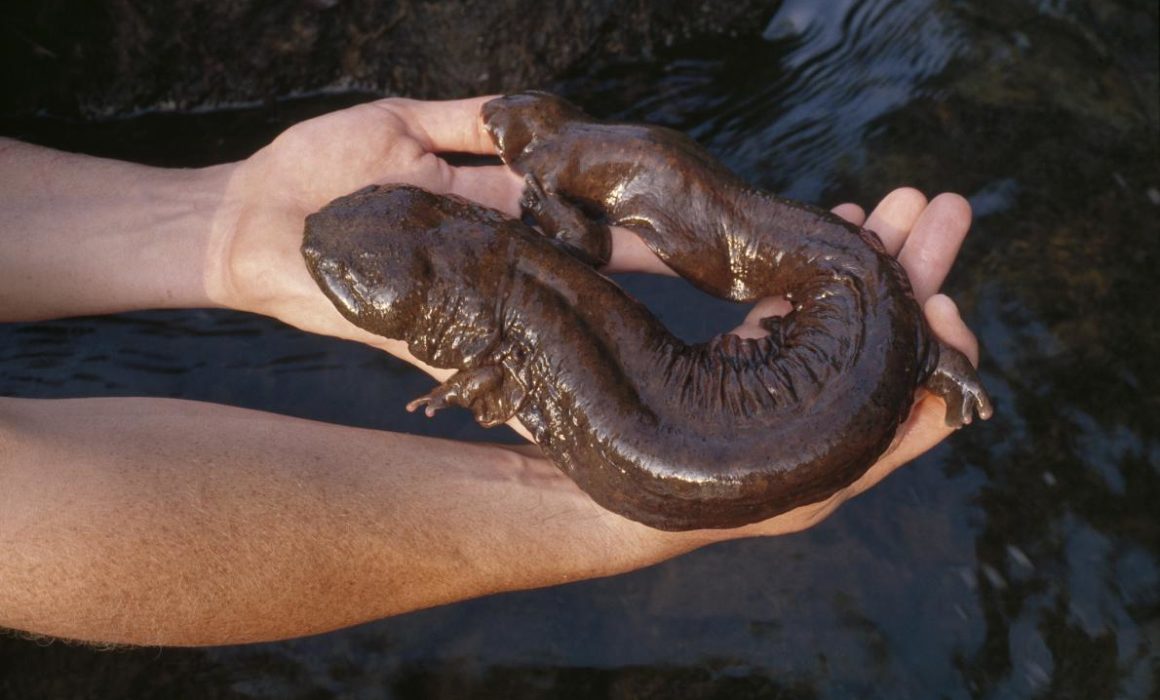 U.S. Giant Salamanders Slipping Away: Inside the Fight to Save the Hellbender

Snot otters. Lasagna lizards. Allegheny alligators. With nicknames like these, you’d think the actual animal, a salamander more commonly known as a hellbender, would be a natural poster child for endangered wildlife.

Instead, hellbenders live quiet lives tucked away under large rocks in the mountain streams of eastern North America, from Arkansas to New York. Ranging in color from mottled olive-gray to chocolate brown with rust-colored splotches, the nocturnal amphibians can easily be mistaken for rocks, if they’re seen at all.

The U.S. government currently considers the eastern hellbender a species of concern, while the Ozark subspecies was federally listed as endangered in 2011. The International Union for Conservation of Nature’s Red List of Threatened Species classifies the hellbender as near threatened, although their total number is unknown. (See “‘Snot Otter’ Sperm to Save Giant Salamander?”)

But it wasn’t until a 2005 survey that scientists saw a 40 percent reduction in the number of adults at monitoring sites, perhaps due to predation or disease—researchers are still trying to figure out the causes. “That got us really concerned,” Roblee said.

Declining populations have prompted conservation efforts in New York, as well as in states across the hellbender range, including Ohio and Missouri.

These programs aim to study the biology of North America’s largest salamander—which can reach a length of 2 feet (0.6 meter)—as well as to try and reintroduce the animals to the wild.

Salamanders are vulnerable for a few reasons. First, “they are really closely tied to their environment,” said Kim Terrell, a conservation biologist with the Smithsonian’s National Zoo in Washington, D.C., who studies hellbender immune systems.

“Unlike a lot of other salamanders, [hellbenders] breathe entirely through their skin,” she explained. That means the fully aquatic amphibians need clean, cold, oxygen-rich freshwater to live.

Because of that, hellbenders thrive only in areas with good water quality, Terrell said.

“Imagine if you’re in a river, and you’re dragging your lungs around behind you—things are not going to go well if that river is polluted or muddy or murky,” the conservation biologist explained.

And declining hellbender numbers are mirroring the declining health of their habitats. (Read about vanishing amphibians in National Geographic magazine.)

Changing land use, such as an increase in agriculture, is causing greater loads of dirt and sediment to pile up in streams throughout the hellbenders’ range, reducing water quality. What’s more, many of these streams also contain harmful toxins and chemicals. Both developments are driving this unassuming amphibian into the ground.

Unknown diseases may also be afflicting hellbenders, and researchers are ramping up monitoring efforts to try to understand why the animals are getting hit with chronic skin conditions. For example, several biologists are swabbing hellbenders and cataloguing any potential disease-causing organisms they find.

“We know that hellbenders are really sensitive to disease,” Terrell said. “And we find animals that have evidence of skin disease quite often in the wild. But we don’t know what’s causing it.”

One particularly nasty infection can cause some hellbenders to lose one or more of their feet. “Something is eating that foot tissue, and you’ll find animals with exposed bone, missing feet,” explained Terrell. “That’s pretty serious for a group of animals that tend to have incredible healing abilities.”

The fungus is found in hellbender habitats, and on the animals themselves, said Thomas Floyd, a wildlife biologist with the Georgia Department of Natural Resources.

Previous research has found that chytrid can also hide out in crayfish—hellbenders’ favorite food—showing that the fungus can persist in other species before it jumps to an amphibian.

But based on skin swabs from hellbenders, “there’s no indication it’s a problem yet,” Floyd said.

Floyd and his colleagues are working hard to ensure their hellbender populations remain safe.

The state has perhaps some of the healthiest populations of hellbenders in the country, Floyd explained, and they regularly monitor the wild animals to make sure they stay that way.

That often involves donning a mask and snorkel and rooting under rocks in water as chilly as 60°F (16°C) to look for the animals.

“[In Georgia], if you look at areas where they’re doing really well, they’re on public land,” which tends to have more intact forests, he explained. “There’s a direct correlation between forest cover and habitat quality.”

That’s because forests are natural barriers against erosion, preventing sediments from washing into mountain streams and clogging up the waterways.

Hellbenders in the Empire State

“The hellbenders in Susquehanna have nearly disappeared, and we don’t know the reasons for the decline,” he said. Researchers have seen only two hellbenders in this watershed over the past three years.

A team of biologists and students tried searching for the wrinkly creatures again this year, with no luck. “The situation there is quite dire,” said Roblee.

The wildlife biologist and his colleagues are instead concentrating their efforts on the Allegheny, “where the hellbenders are doing better, thankfully,” Roblee said.

Population numbers in the Allegheny River seem to have stabilized in the past two years: Surveys in 2012 found between 60 and 100 hellbenders at various monitoring sites, and those numbers seem to be holding.

Luckily, “no severe health problem has shown up,” he added.

Even so, the Allegheny populations have declined 40 percent since the 1980s. (See more pictures of amphibians declining worldwide.)

The problem could be due to the fact that not enough young hellbenders are making it to adulthood, Roblee said. “Many of the monitored sites only had large adults.”

So the biologist and his colleagues decided to give young hellbenders a leg up.

By hatching and raising hellbenders in captivity, Roblee and colleagues hoped to give the amphibians a refuge to grow to a size—around 9 inches (23 centimeters)—that makes them less vulnerable to predators.

Once the animals get big enough, they’re released back into streams in the Alleghenies. (See “Hellbenders Reintroduced in New York: Freshwater Species of the Week.”)

A 2009 grant from the U.S. Fish and Wildlife Service enabled Roblee and colleagues at the Buffalo Zoo in New York to collect 744 eggs from a hellbender nest in the wild.

The team successfully hatched 610 of the eggs, but soon realized they needed help raising all those animals. Luckily the Bronx Zoo; the Seneca Park Zoo in Rochester, New York; and the Seneca Nation of Indians expressed interest in taking some of the amphibians in, and each soon had their own colonies of young hellbenders.

The first release of hellbenders occurred in 2011, when 46 young salamanders bearing tiny radio-tracking tags were released into streams in the Alleghenies. The scientists released another hundred tagged animals in 2012.

But the results have been mixed. When researchers went back to check on the tagged amphibians released in 2011, only 4 percent of the animals remained where scientists had released them. Of the 2012 reintroduction, only 8 percent were found in the original area.

Roblee explained that they’ve observed some of the hellbenders moving farther downstream, up to about 3,000 feet (900 meters) away.

This wanderlust may be a problem, because when young hellbenders travel, they’re leaving the protection of their rocks and exposing themselves to predators.

So this year, when the biologists released another 250 young hellbenders, they tried enclosing the amphibians’ rocks in vinyl wire cages to keep the animals from wandering too far from safety. But the salamanders escaped.

Several of the 2013 animals ended up dead—suggesting predators including raccoons, mink, and otter are eating them.

But the researchers aren’t giving up yet: They have 150 hellbenders left in captivity, which are slated for release in 2014. “We’re modifying the cage design to keep [the hellbenders] securely inside to reduce the predation we’re seeing,” Roblee said.

The hope is that the cages will keep the salamanders in place long enough for them to become accustomed to their new homes—enough time so they won’t feel the need to leave.

Roblee has had a much easier time working with the landowners who live among hellbenders.

Initially, most weren’t aware that they even had these giant salamanders on their property, he said. But once they learned about the animal and what researchers were doing, they were willing to work with the scientists.

One campground owner is even helping the Smithsonian’s Terrell collect data on how changing temperatures affect hellbenders.

The volunteer kayaks out to collect temperature sensors scattered in the stream, sends the data to Terrell, and then returns the sensors to the river, said Roblee.

The fascination with the salamander and a willingness to work with conservation efforts is something Will Miller, chief conservation officer with Seneca Nation Fish and Wildlife, has noticed during his outreach efforts.

The Seneca Nation originally got interested in hellbenders because of a cultural connection, Miller said. Tribe historians say some of the Nation’s stories are connected to the hellbender, he said.

In addition to monitoring the Seneca Nation’s territory for hellbenders and raising 20 of the amphibians for the reintroduction program, Miller and his colleagues travel to hunting shows and local schools to help the public understand the salamander’s situation.

Their efforts were rewarded this year when fishers sent Miller a cellphone picture of a hellbender they had accidentally caught but then released once they realized what it was.

New York State’s Roblee hopes to capitalize on that appreciation to save the amphibian from extinction.

“As a society, as we move forward in time, we’d like to take the hellbenders with us,” he said, “and not be responsible for their demise.”