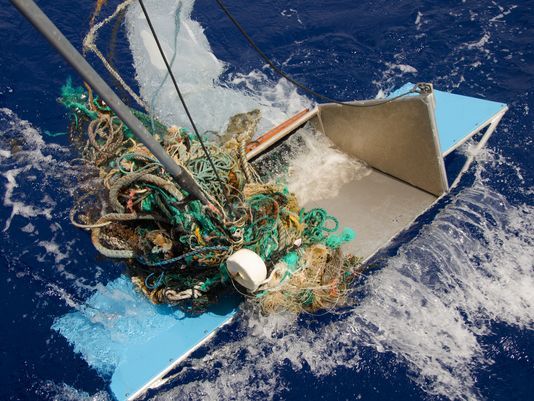 The world’s largest collection of ocean garbage is growing.

The Great Pacific Garbage Patch, a collection of plastic, floating trash halfway between Hawaii and California, has grown to more than 600,000 square miles, a study published Thursday found. That’s twice the size of Texas.

Winds and converging ocean currents funnel the garbage into a central location, said study lead author Laurent Lebreton of the Ocean Cleanup Foundation, a non-profit organization that spearheaded the research.

First discovered in the early 1990s, the trash in the patch comes from around the Pacific Rim, including nations in Asia and North and South America, Lebreton said.

The patch is not a solid mass of plastic. It includes about 1.8 trillion pieces and weighs 88,000 tons — the equivalent of 500 jumbo jets. The new figures are as much as 16 times higher than previous estimates.

The research — the most complete study undertaken of the garbage patch — was published Thursday in the peer-reviewed journal Scientific Reports.

“We were surprised by the amount of large plastic objects we encountered,” said Julia Reisser of the foundation. “We used to think most of the debris consists of small fragments, but this new analysis shines a new light on the scope of the debris.”

The study was based on a three-year mapping effort by an international team of scientists affiliated with the Ocean Cleanup Foundation, six universities and an aerial sensor company.

More: Our trash harms the deepest fish in the ocean

More: Humans have produced 18.2 trillion pounds of plastic since the ’50s. That’s equal in size to 1 billion elephants.

Sadly, the Pacific patch isn’t alone. The Great Pacific Garbage Patch is the largest of five such trash collections in the ocean, Lebreton said.

This video shows the devastating plastic waste that is overtaking the waters near Bali. Buzz60

Scientists work with the European Space Agency to take photos of the garbage patches from space.

No governments have stepped up to clean the trash, which is in international waters, so it’s up to privately funded groups such as the Ocean Cleanup Foundation to take the lead in getting rid of the garbage.

There’s a sense of urgency, said Joost Dubois, a spokesman with the foundation.

“It’s a ticking time bomb of larger material,” Dubois said. “We’ve got to get it before it breaks down into a size that’s too small to collect and also dangerous for marine life.”

Since plastic has been around only since the 1950s, there’s no way of knowing exactly how long it will last in the ocean. If left alone, the plastic could remain there for decades, centuries or even longer.

“Unless we begin to remove it, some would say it may remain there forever,” Lebreton said.